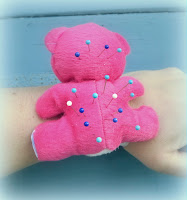 I don´t know if any of you ever got such cheap and useless toys for your kids. In Germany, we have these „Karnevalszüge“ each year, the closest thing to this is a mardi gras parade. On our parades they throw sweets, little gifts and small toys for the children.

Such toys keep collecting dust until mom puts them to the waste bin. Not this year! I had a cute and really practical idea hot to give the teddys a second live. They will become pincushions!

There are tons and tons of pincushion ideas out there. But what I never liked on all these ideas was the fact, that you have to buy stuff or sew a pincushion. With the teddy-pincusions the sewing goes down to a minimum! 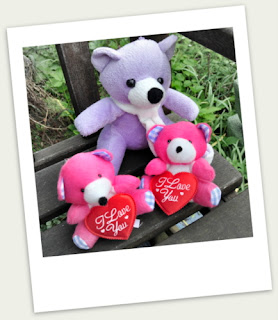 First you will need to collect some small soft toys. Maybe your kids have got lot of these from everywhere. Often they come as giveaway in stores or events.

I had two small ones from the german mardis gras, and a bigger one in lavender colour from my daughter. She will never recognize I took it, she mooved years ago and left him behind. 🙂

For my first idea you will need some stuff, that you will find in everyones sewing box. A broad rubber band (the broader, the better), matching thread, scissors and a needle.

I had some lacy rubber in my stash, so I used this one. You can even reuse old wristbands from an old wristwatch, its up to you if you use what you have.

Next measure the length of the rubber band by putting it around you wrist. I took a double layer because the lace was a bit thin. Cut and sew the band. 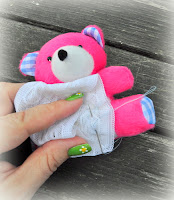 Now sew the band to the teddy. I found out it is best to try the best position of the teddy before you sew. My teddy worked best for me by putting his belly toward my arm and in a right angular, so that his nose has some space on my wrist.

My teddy was so pleased with my work that he asked for a walk in my garden. We found a place, where the spring flowers matched the pinheads! Amazing! 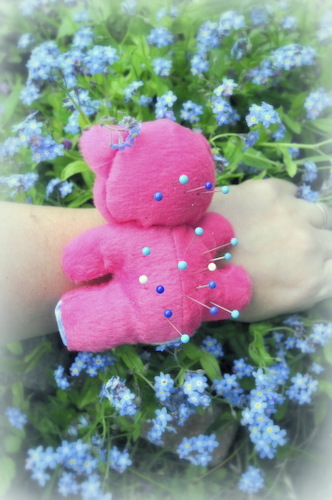 After some up and downs he felt a bit queasy, but I told him he has to get used to it! 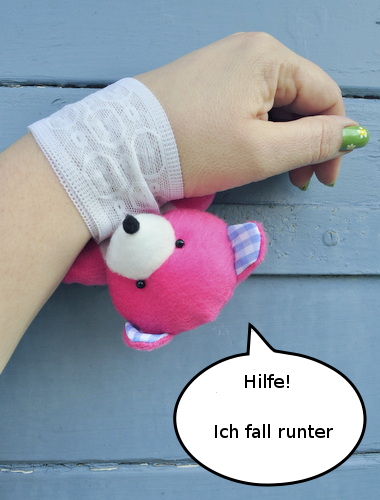 I translate what he said: „Help! I fall down!“

I hope you enjoyed my little idea. Next time I will show you what I made with the other two bears.