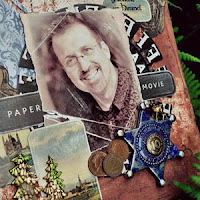 Three posts on one blogday…that’s my personal record! But the upcoming week will be so busy and I don’t know when I have spare time to blog. So…sorry. Now or never!

In January I visited a trade show in Frankfurt and met Ken Oliver from the company Spellbinders. This incident had a deep impact on me. Many others will approve that he has an outstanding personality in the creative world. But I don’t want to praise Ken too much, I don’t know if he can take it. 😉

He made me take a deeper look into the world of die cut machines and their possibilities. And I met some other extraordinary creative persons I already have spoken about and will refer to as my new friends even now and then. I have to admit that they all are „virtual“ friends so far, but I hope and believe that people who have to meet in their life will meet. No matter how or when.

Based on the contact to all those talented people I felt myself to be a bit boring, old fashioned and outdated. But my „real“ friends know me better. I can be creative, and that’s what I try to proove every day.

One thing I struggle with (beside shabby, layering and CAS) is scrapbooking. Scrap friends better stop reading now… I still don’t know why on earth someone needs more than maybe 2 or 3 photoalbums. My grandmother used to collect her lifetime memories in a tin box. I loved to open that box from time to time and grab some of the old pictures.

Nowadays scrapbooking has become BIG, and – let’s face it- a whole industry makes it’s living with it. But I refuse to buy tons of ready made stuff to glue it around a photography.

Nevertheless I regard myself as a crafter and designer. And professional or not… I WANT to be able to make a scrapbook layout. Now that you know my background I want to show my first attempt. And because I adore Mr. Ken so much I choosed his actual facebook profile picture for scrapping. In case you wonder: I have asked for his permission. He said YES! YAY!

Did I mentioned I never understood why the layouts have to be 12×12 inch? Does anyone know? Enlighten me please. But because I have to start somewhere, I bought some 12 inch cardboard squares. Take a look: 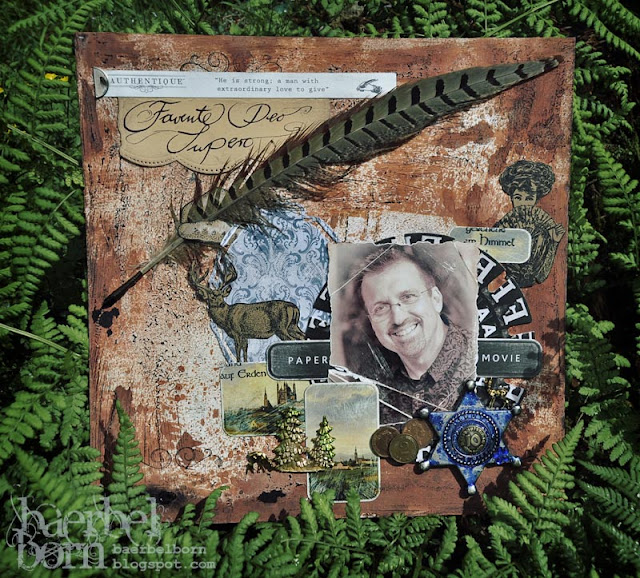 Because my usual photo setting is for cards and small stuff I had to go outside. How do you scrap people photograph your stuff? Indoors won’t work for me.

First I went to the local drugstore and made some Ken pictures at their photo machine. I distressed them with some folds and sandpaper. I used the sanding process on other stuff too. I didn’t have the patience to wait until everything aged the natural way.

Then I covered the cardboard with a paste called „Strukturpaste“ for a three dimensional base. (Edit: Seems this paste is called „molding paste“ or „texture paste“) I rolled additional structure in with a massage tool. Fun! After it dried I added some vintage Ranger inks (Adirondacks) with an old toothbrush. I refuse to buy all that art stuff if I can do it with old tools from my household.

The structure of the paste popped after I rubbed it with crayons. Love my crayons. They love me too and still stick to my fingers.

All paper elements have gone through my Grand Calibur machine by Spellbinders with various dies.

Now you will need some briefing about the other stuff in that layout. I made another picture for you (click for larger version) 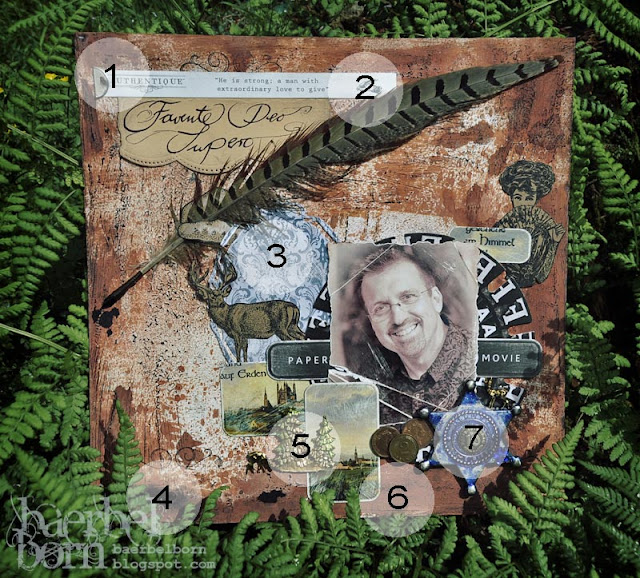 1) During a trip to Scotland for his company Spellbinders Ken recently discovered his relations to a clan named „Mitchell“. That‘ s what he told us on facebook. Everyone knows I admire this country. Each clan has its own motto. The Mitchell clan’s motto is „Favente Deo Supero„, what means something like „by god’s favour I conquer“. Jep, that’s Ken. Must be. He conquers the crafting world.

2) The family crest shows a writing hand! When I bought a patterned paper (3) to match the fabric of his shirt on top of that paper I found this when I got home from the shop. I swear, it was a coincidence. You see the small image on the right? The Mitchell crest! Holy Moly! The crest is also an element of my layout, in case you didn’t notice. 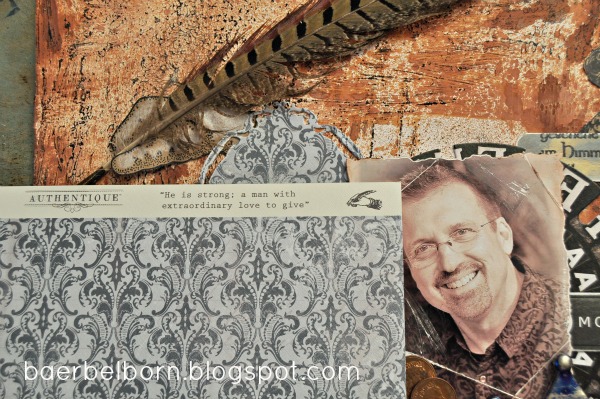 I had to use this part of the paper in my layout. Then I saw what is written there, on the left of the writing hand. And yes! Ken again! Really coincidence? Frightening!

3) The paper I bought to match his shirt.

4) Some accidents I had with glue and paint.

5) The small fir trees and the tiny deers are from a german souvenir I kept since I was 5. Finally I could use it! And got rid of it. Did everybody knew that Ken can speak German? So I added some old german postcards snippets of Worms (german town) too.

6) Money talks: Ken collects vintage and rusty stuff. Like I do. The vintage coins from England and Germany stand for his roots, his ancestores came from pretty UK and our land of fairytales and castles. I guess.

7) The sheriff’s star was my sons pride during german mardigras 10 years ago. I glued a money shaped button on top to cover the ugly center. Coloured it with Marabu glas paint because I needed something blue in there. Because Ken lives in Arizona I thought that might fit in. 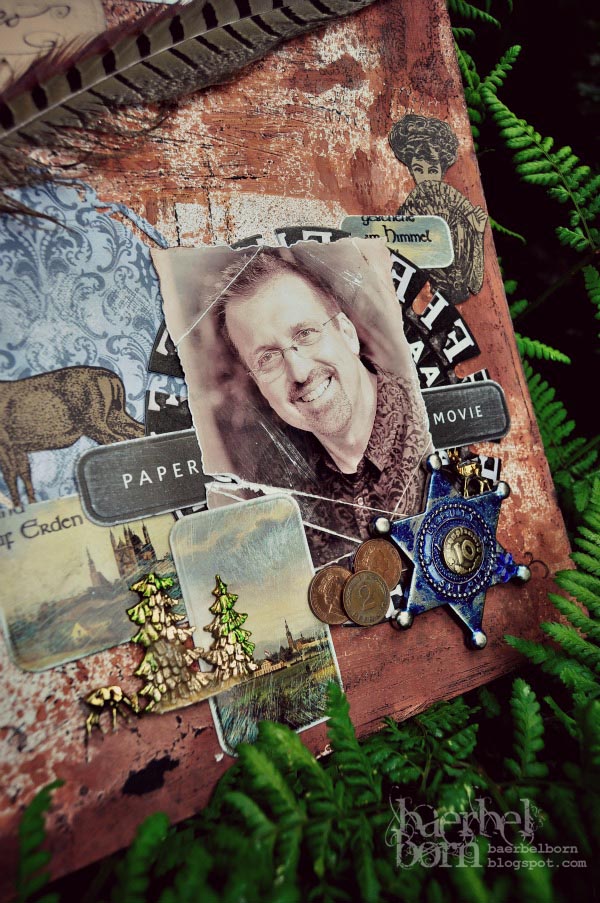 I could go on and on and on… but I think I have talked more about that page than I actually worked on it, hehe. I hope you had some fun time here and come back for another episode of „Baerbel’s layout lament“. I am never satisfied. I think its overdone. Don’t try to contradict, no one can change my mind on such matters.

Big hugs and thanks to Ken Oliver from Spellbinders, Arizona. Your funny and kind facebook talk made me smile so often, I wouldn’t miss it for the world! 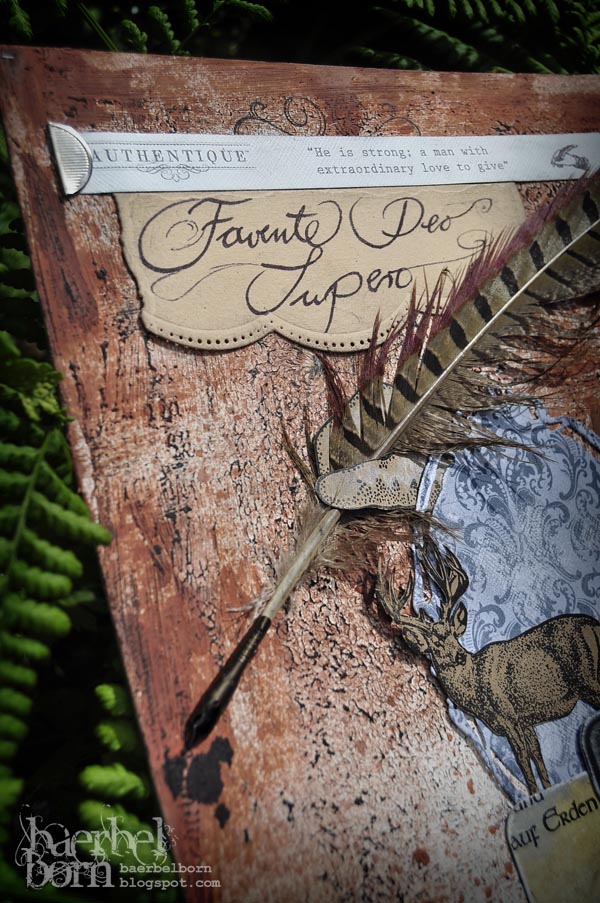 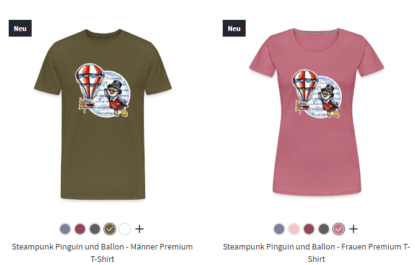